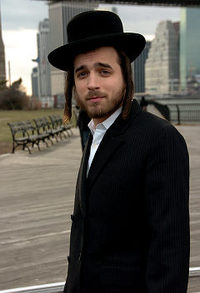 Abe Karpen, 25, a married father of three, was cast as Portman's husband in "New York I Love You," a film composed of 12 short stories about love in the five boroughs.

"I am backing out of the movie," said Karpen, a kitchen cabinet salesman. "It's not acceptable in my community. It's a lot of pressure I am getting. They [the rabbis] didn't like the idea of a Hasidic guy playing in Hollywood.

"I have my kids in religious schools and the rabbi called me over yesterday and said in order for me to keep my kids in the school I have to do what they tell me and back out," Karpen said.…

"[The director] wanted me to hold her hand, but I said 'no way,'" said Karpen, who proudly stood his ground. "It's against our religion. You can't even hold your wife's hand on the street."

Then came the howls of protest about his unorthodox job.

"This is when I woke up and saw that I made a big mistake. My kids mean everything to me and my community where I live means everything to me," said Karpen, who comes from a prominent Williamsburg, Brooklyn, family.

His longtime friend Levi Okunov said the Karpens had to flee the city for the weekend. "The community wants to kill him," he said.…

The idea that Levi Okunov could be Karpen's "longtime friend" should give one pause. But I digress.

"We don't watch television. We don't go to the movies, so to be in a movie is the worst thing. It's a shame for any Hasid," he said.…

So a guy who refused to hold Natalie Portman's hand has to flee Brooklyn in fear because he acted in a movie, but rabbis who steal millions of dollars from federal and state programs, or who molest children, can live in peace. That should be the shame for every hasid.

Still, despite his troubles, Karpen had nothing but kind words for the film and Portman.

"She's the only one I was willing to work with," Karpen said. "I was shocked that she's a Hollywood big shot. We talked in Hebrew. ... She wants to become more religious."

Well, I hope this incident has disabused Portman of that notion.