« Who Is The Rabbi Behind The "Kidnapping" Of Isaac Hersh? | Main | Did The Price of Kosher Meat Rise In The Past Months? »

Haredim and Organ Donation, part 3 – Rabbi Elyashiv and the Angel of Death

Rabbi Yosef Shalom Elyashiv already permits a situation where haredim do not donate organs but the do take them.

In the mind of Rabbi Elyashiv, taking organs from a brain stem dead person is committing murder. Still, he allows his followers to benefit from those harvested organs.

…even further into his darkness, as Ynet reports: 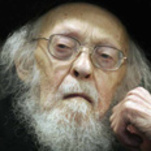 "Thou shalt not kill," cried the pashkevils (large posters hung in public spaces) to the ultra-Orthodox community in Jerusalem on Wednesday. The rallying cry asked the haredi public to prepare for a battle that "will shake the very foundations of this country," against the newly approved law regarding brain and respiratory death. The writers accused the new bill of "permitting murder in the case of brain death." Which, they said, was "murder in every sense of the word."

Community rabbis cautioned the public to be aware of the new law and demand Torah commands be fulfilled in their entirety. "Doctors should also beware not to betray the word of God, and not to assist in murder," read the posters, adding blessings of wellness to the people of Israel suffering from illness.

On Wednesday morning two pashkevils ran the views of two of the most prominent rabbis belonging to the Lithuanian non-Hasidic ultra-Orthodox Jewish community. The first was a renewed publishing of a poster from 1991, the year in which Rabbi Yosef Shalom Elyashiv and Rabbi Shlomo Zalman Auerbach determined that the pronouncing one dead on the basis of brain death was tantamount to murder.

The second poster was published solely in Elyashiv's name, and said: "As I have already stated, as long as the heart (of the prospective organ donor) is still pumping blood, even in the case of 'brain death,' it is not permitted to remove any organ from the patient.'

The newly approved organ donation law will give every family the right to decide by which halachic ruling they prefer the pronouncement of death to occur – whether based on brain death or heart failure.

Meanwhile, Sephardi Chief Rabbi of Israel, Shlomo Amar, and Shas spiritual leader Rabbi Ovadia Yosef have both voiced their support for the new law, which is intended to encourage organ donation among the religious community in Israel.I pointed out earlier that Israelis are already banned from transplant waiting lists in all western countries except the US because Israelis take organs (from goyyim, of course) but do not donate.

Rabbi Tendler and others fear this ban will soon be extended to all Orthodox Jews.

Rabbi Elyashiv is wrong. He's wrong about the halakha. He's wrong for starting a public campaign against organ donations. And he is wrong for behaving like a spoiled child who cannot tolerate halakhic challenges.

He is a man who history will judge harshly, even as his followers march deeper into the the hell he has prepared for them.

Posted at 09:14 AM in Haredim, Israel, Med-Ethics, Public Health | Permalink

Haredim and Organ Donation, part 3 – Rabbi Elyashiv and the Angel of Death

Rabbi Yosef Shalom Elyashiv already permits a situation where haredim do not donate organs but the do take them.

In the mind of Rabbi Elyashiv, taking organs from a brain stem dead person is committing murder. Still, he allows his followers to benefit from those harvested organs.