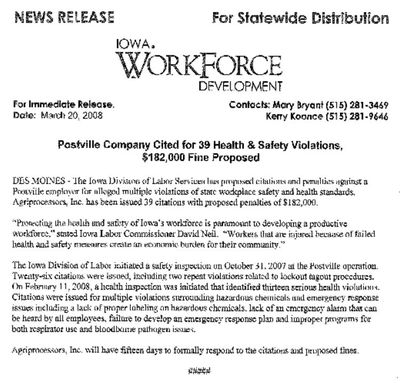 Is there more to this story than meets the eye? I think…

Rubashkin, his good friend and business associate Rabbi Asher Zeilingold, and Zeilingold's friend Carlos Carbonera issued a fake OSHA report "clearing" Agriprocessors of the many charges leveled at it by workers and their advocates in the pages of the Forward.

I showed then that the "OSHA report" had not been issued by either OSHA or by Iowa state officials.

Iowa is a State-PLan state, which means it does all the inspection and enforcement of OSHA regulations, and OSHA itself cannot work in the state unless invited by state leadership.

The Iowa officials I spoke with then, while unable to comment on this specific case, did note their general displeasure at being misrepresented.

For its part, federal OSHA's regional director had this to say:

OSHA's regional head Chuck Adkins told me again today that he will "bring the hammer down" on anyone, this inspector included, who uses OSHA's name without permission. He also pointed out that what this inspector did was a violation of OSHA's "internal rules and regulations."

Companies can invite OSHA to do a consult. The findings from that consult are kept secret, and the company has one year to correct all problems before OSHA (or its state agents) can issue fines and penalties.

Rubashkin was, in fact, told to do this by the OSHA employee who, on his own time, illegally went to Agriprocessors and "inspected" it for Rubashkin, Zeilingold and Carbonerra.

The faker OSHA report was released by Rubashkin and Rabbi Zeilingold in January of 2007.

By late January 2007, OSHA and Iowa officials were aware of the fraud.

Did Rubashkin ever ask for an OSHA consult? I'm not yet sure.

But what I do know is, just over one year after the story of the fraudulent OSHA report broke (it broke here, by the way), Rubashkin has now been cited with OSHA 39 violations.

Rabbi Zeilingold is the head of United Mehadrin Kosher. This is UMK's kosher symbol:

Keep it in mind when you shop for 'kosher' food.

UPDATE 5 PM – Here's more on the actual violations from the Des Moines Register:


…Kerry Koonce, communications director of Iowa Workforce Development, said the proposed citations and penalties stemmed from a safety inspection conducted by the Iowa Division of Labor on Oct. 31 at the Postville operation and a Feb. 11 health inspection.…

Is there more to this story than meets the eye? I think…