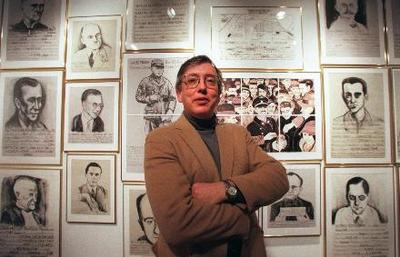 Stephen Feinstein was a man few of you knew. An internationally known academic whose field of study…

…was first the Soviet Union and Russian History and later the Holocaust and Genocide, he passed away Tuesday evening. Steve was 64.

Back in the pre-Operation Moses days, when few people could really be called a friend of Ethiopian Jewry, Steve was. He was also a friend and mentor to me, taking a punk college kid and elevating him to co-chair of the Jewish Community Relations Council's Commission on International Jewish Affairs.

He used to jokingly refer to me as his oldest son.

Steve and I later resigned from that position over the JCRS's refusal to take action for Ethiopian Jews. We then started the independent Twin Cities Committee for Ethiopian Jews with other activists. At its peak, the TCCEJ drew dozens of people to its meetings. We lobbied our US senators and congresspeople, launched a metro-wide education drive, and teamed with the American Refugee Committee to facilitate rescue.

I moved on to head Ethiopian Jewry efforts for the American section of the World Union of Jewish Students and later played a larger leadership role there. Then, as I became increasingly Chabad-haredi, Steve and his wife Susan and I lost touch.

Over the last couple years, Steve and I exchanged sporadic emails. A few months ago, I went to an event his center sponsored, more to say hello than to hear the speaker. But Steve wasn't there. At last minute he had to cover a another center program elsewhere.

Don't waste the time you have, people. Don't lose touch with friends or family because of differing lifesyles or ideology. Don't think there's always tomorrow.

Historian's death called loss to study of the Nazi Holocaust

On Tuesday evening, Stephen Feinstein was doing what he often did, giving a speech about the Holocaust. This one was at the Sabes Foundation Minneapolis Jewish Film Festival in Hopkins.

Suddenly he was at a loss for words. He was taken to Abbott Northwestern Hospital in Minneapolis, where he later died. He was 64.

An international outpouring of grief has greeted the death of the world-renowned historian of genocide studies.

"Stephen Feinstein was involved in preserving the memory of those who perished in the Holocaust," Nobel laureate and concentration camp survivor Elie Weisel said in a statement. "All those who knew him will miss him."

Feinstein was the director of the Center for Holocaust and Genocide Studies and adjunct professor of history at the University of Minnesota.

"His classes on the history of the Holocaust had record student enrollments year after year," said center outreach coordinator Ellen Kennedy.

Previously, he taught at a number of colleges including the University of Wisconsin. He curated many art exhibits and spoke internationally about genocide.

He was also responsible for bringing the current exhibit, "Deadly Medicine," to the Science Museum of Minnesota in St. Paul.

"It is a great personal loss and an irreplaceable loss to the community," he said.

Many remember Feinstein as both an academic and an activist for genocide prevention and justice.

"He was a beautiful combination of intellectual understanding and of a commitment to dealing with these challenging issues," said Mort Ryweck, who met Feinstein while directing the regional Jewish Community Relations Council.

And for a genocide historian, he was also quite funny.

From his impersonations of Donald Duck to the bumbling Kazakhstani "journalist" Borat, his humor helped others deal with the most horrific atrocities in history, all the while retaining a sense of dignity and compassion for all victims of genocide.

"By somehow making things inappropriately amusing, he was able to convey the truth and the absurdity of the Holocaust," Kennedy said.

Feinstein also took a deep interest in his students, staffing half of his department with U undergrads who had taken his classes and subsequently had become interested in genocide studies.

"I think he felt that they represented hope for a different and more positive future," Kennedy said.

The day before his death, colleagues planned to nominate him for the University of Minnesota Outstanding Service Award.

"More than anything else, he was a great humanitarian who believed that knowledge of the past could prevent atrocities in the future," Kennedy said.

Feinstein leaves behind his wife, Susan, his son, Jeremy, his daughter and son-in-law, Rebecca and Avi Winitzer, and two grandchildren, Sarah and Shammai.

Services will be at 2 p.m. Friday at Beth El Synagogue in St. Louis Park.

All memorials are to be directed to the Center for Holocaust and Genocide Studies.

Kathryn Nelson is a University of Minnesota student on assignment for the Star Tribune.

Posted at 04:24 AM in Ethiopian Jews | Permalink

Stephen Feinstein was a man few of you knew. An internationally known academic whose field of study…