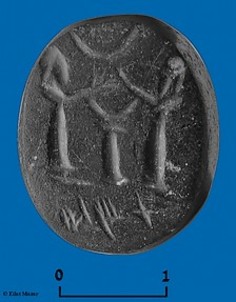 Remember the seal found by archaeologist Dr. Eilat Mazar? It shows two idolatrous priests offering incense to the Babylonian god Sin, the sun god. Mazar found this seal in Jerusalem and read the inscription on the seal as "Temach," a family mentioned in the Tanakh as returning from Babylonia with the first wave of returnees to build the Second Temple.

But, other scholars say, Mazar is …

…wrong, at least with regard to the name on the seal. She read the inscription backward. It really reads "Shlomit," a popular name at the time shared by some families and many women – including Zerubbabel's daughter.

A prominent Israeli archeologist said Monday that she has revised her reading of an inscription on ancient seal uncovered in an archeological excavation in Jerusalem's City of David after various scholars around the world critiqued her original interpretation of the name on the seal.

The 2,500 year-old black stone seal was found last month amid stratified layers of debris in the excavation under way just outside the Old City walls near the Dung Gate, said archeologist Dr. Eilat Mazar, who is leading the dig.

Mazar had originally read the name on the seal as "Temech," and suggested that it belonged to the family of that name mentioned in the Book of Nehemiah.

But after the find was first reported in The Jerusalem Post, various epigraphers around the world said Mazar had erred by reading the inscription on the seal straight on (from right to left) rather than backwards (from left to right), as a result of the fact that a seal creates a mirror image when used to inscribe a piece of clay.

The critics, including the European scholar Peter van der Veen, as well as the epigrapher Ryan Byrne, co-director of the Tel Dan excavations, suggested in Internet blogs that the correct reading of the seal is actually "Shlomit," also a biblical name.

Mazar said Monday that she accepted the reading of "Shlomit" on the ancient seal, and added that she appreciated the scholarly research on the issue.

"We are involved in research, not in proving our own opinions," Mazar said.

She noted that the name Shlomit was known in the period form which the seal dated, and that other contemporary seals had been found that bore names of women who held official status in the administration.

It was not clear whether the name on the seal had any connection to the daughter of Zerubbabel by the same time mentioned in 1 Chronicles 3:19, since the name was apparently common in the period.

The grandson of Judean King Jehoachin, Zerubbabel, led the first band of Jews who returned from the Babylonian captivity, and laid the foundation of the Second Temple in Jerusalem.

"What we can say for sure is that this woman was an important woman in the society," Mazar said.

The seal, which portrays a common and popular cultic scene, was bought in Babylon and dates to 538-445 BCE, Mazar said.

In contrast, Byrne suggested that a date in the late seventh or early sixth century was more probable, noting that scene was typical of the Iron Age Levant and that there was no reason to surmise the seal had been made in Babylon.

The 2.1 X 1.8 cm elliptical seal is engraved with two bearded priests standing on either side of an incense alter with their hands raised in a position of worship.

A crescent moon, the symbol of the chief Babylonian god Sin, appears on the top of the altar, Mazar said.

The fact that this cultic scene relates to a Babylonian god seemed not to have disturbed the Jews that used the seal, she added.

Mazar gained international prominence for her recent excavation that may have uncovered the biblical palace of King David.

The three-year-old east Jerusalem dig is being sponsored by the Shalem Center, a Jerusalem research institute, where Mazar serves as a senior fellow, and the City of David Foundation, which promotes Jewish settlement throughout east Jerusalem.

What this means is the criticism of some readers – who noted the Temach family were not really full Jews, and who therefore claimed that the seal should have  no impact on how we view our history – should be completely disregarded.

Yes, our fathers worshiped idols, far more often and far more pervasively than we have previously believed. And no rabbinic spin can change that.

Remember the seal found by archaeologist Dr. Eilat Mazar? It shows two idolatrous priests offering incense to the Babylonian god Sin, the sun god. Mazar found this seal in Jerusalem and read the inscription on the seal as "Temach," a family mentioned in the Tanakh as returning from Babylonia with the first wave of returnees to build the Second Temple.

But, other scholars say, Mazar is …