« GUEST POST: The History of Ashkenazi Jewry through the Prism of DNA | Main | Archaeologist hid 'Jesus tomb' for fear of anti-Semitism, widow says »

Chief Rabbi Shlomo Amar: "I Wish Millions [of Ethiopians] Would Come To Israel" 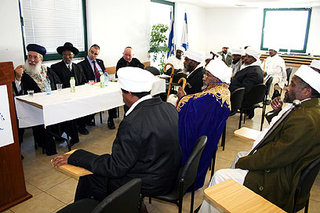 Speaking at a conference of kessim (Ethiopian Jewish religious leaders) organized by the Absorption Ministry, Israel's Sefardic Chief Rabbi Shlomo Amar called for the aliya of all Falash Mura, no matter how many people that might be. Ynet reports:

…"[Certain Cabinet Ministers'] words imply that the immigration of millions of Ethiopians to this country is a curse. I wish millions would indeed come," continued Rabbi Shlomo Amar, who also said he has sent a letter on the matter to Prime Minister Ehud Olmert.

Several years ago Amar traveled to the Ethiopian city of Gondar to examine the validity of the Falash Mura's Judaism. In a ruling seconded by Rabbi Ovadia Yosef, Amar determined that their Judaism was not be questioned any further and that therefore under the Law of Return they must be brought to Israel.

"I call for these Jews to be released and brought here, every Jew who wants to come here should be brought, after inspection of course, but regardless of whether he is from Romania or Ethiopia. We must bring these Jews to the State of Israel," said Amar.…

Here is an interesting example of how halakha functions. Because legitimate halakhic rulings were made asserting Ethiopian Jews are fully Jewish and therefore do not need to convert, the Falash Mura – who are descended from Ethiopian Jews who converted to Christianity about 100 years ago under duress – have to be treated as Jews, at the very least with regard to rescue, education, food aid, etc.

In other words, the halakhic rulings that most benefited Ethiopian Jews are the very same rulings that now bring the Falash Mura to Israel.

Barring evidence that specific Falash Mura are missionaries, there is no other halakhic option.

Known missionaries and practicing Christians can be barred from aliya, I believe, because of other halakhic rulings that argue that a Jew who knowingly practices another religion or serves as a missionary for one has opted out of the Jewish people in a way that allows us to remove certain benefits from him. He would not be able to receive an aliya to the Torah or receive other religious honors. In the same way, entry into Israel, which can be viewed as an honor, could be banned. (This might not be the case, though, if there is immediate physical danger to this individual.)

On a humorous note, an important issue discussed at the conference was shechita, the ritual slaughter of kosher meat:

…The conference dealt with several issues of contention between the Rabbinate and the kessim, particularly regarding the kosher slaughter of animals.

A new initiative put forth by the Absorption Ministry will now see a special course for Ethiopian religious figures to ensure the practice is uniform.

Let's all hope the course will not include instruction on how to use a meat hook.

Posted at 02:44 AM in Ethiopian Jews, Halakha, Israel | Permalink

Chief Rabbi Shlomo Amar: "I Wish Millions [of Ethiopians] Would Come To Israel"

Speaking at a conference of kessim (Ethiopian Jewish religious leaders) organized by the Absorption Ministry, Israel's Sefardic Chief Rabbi Shlomo Amar called for the aliya of all Falash Mura, no matter how many people that might be. Ynet reports: