And Our Fathers Worshiped Idols

In a dig sponsored by the Shalem Center, Dr. Eilat Mazar has found a seal from a prominent Jewish family mentioned in the Book of Nehemiah.

But there may be a huge problem, at least if you are a Torah-believing Jew… 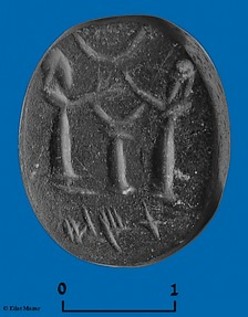 A stone seal bearing the name of one of the families who acted as servants in the First Temple and then returned to Jerusalem after being exiled to Babylonia has been uncovered in an archeological excavation in Jerusalem's City of David, a prominent Israeli archeologist said Wednesday.

The 2,500-year-old black stone seal, which has the name "Temech" engraved on it, was found earlier this week amid stratified debris in the excavation under way just outside the Old City walls near the Dung Gate, said archeologist Dr. Eilat Mazar, who is leading the dig.

According to the Book of Nehemiah, the Temech family were servants of the First Temple and were sent into exile to Babylon following its destruction by the Babylonians in 586 BCE.

The family was among those who later returned to Jerusalem, the Bible recounts.

The seal, which was bought in Babylon and dates to 538-445 BCE, portrays a common and popular cultic scene, Mazar said.

The 2.1 x 1.8-cm. elliptical seal is engraved with two bearded priests standing on either side of an incense altar with their hands raised forward in a position of worship.

A crescent moon, the symbol of the chief Babylonian god Sin, appears on the top of the altar.

The Bible refers to the Temech family: "These are the children of the province, that went up out of the captivity, of those that had been carried away, whom Nebuchadnezzar the king of Babylon had carried away, and came again to Jerusalem and to Judah, every one unto his city." [Nehemiah 7:6]... "The Nethinim [7:46]"... The children of Temech." [7:55]. [Here is Nehemiah Chapter 7 . All I could find online in English is the New King James version, though. Still, it should help understand the article.]

The fact that this cultic scene relates to the Babylonian chief god seemed not to have disturbed the Jews who used it on their own seal, she added.

The seal of one of the members of the Temech family was discovered just dozens of meters away from the Opel area, where the servants of the Temple, or "Nethinim," lived in the time of Nehemiah, Mazar said.

"The seal of the Temech family gives us a direct connection between archeology and the biblical sources and serves as actual evidence of a family mentioned in the Bible," she said. "One cannot help being astonished by the credibility of the biblical source as seen by the archaeological find."…

Yes, the Temech family existed. But they appear to have worshiped the Babylonian sun god with or in place of what we will call, for the sake of decorum, the Hebrew God.

Scholars have long contended our ancestors were much more like JewBus than monotheists. Mazar's find seems to confirm this.

UPDATE: The Post added a picture of the seal, which I posted above. I also added a link above to Nehemiah Chapter 7 so you can read what Tanakh says about the family.

And Our Fathers Worshiped Idols

In a dig sponsored by the Shalem Center, Dr. Eilat Mazar has found a seal from a prominent Jewish family mentioned in the Book of Nehemiah.

But there may be a huge problem, at least if you are a Torah-believing Jew…