Berel Lazar's response to Rabbi Ashkenazi's accusation is posted below. If you have the time and ability to translate, please do so and send it to me in the body of an email (no attachments, please) and I'll post it.

Click the link immediately below for Rabbi Lazar's letter and a rough translation: 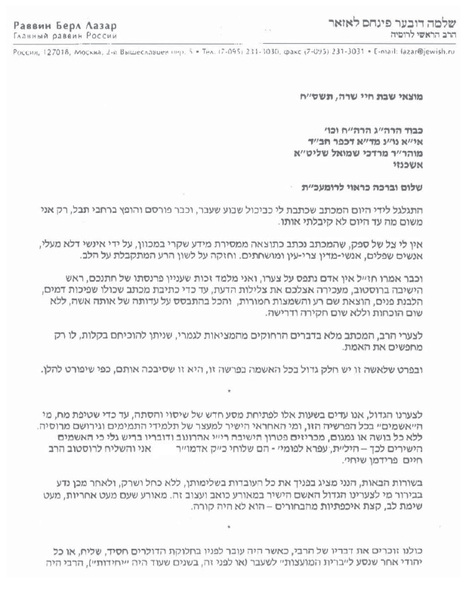 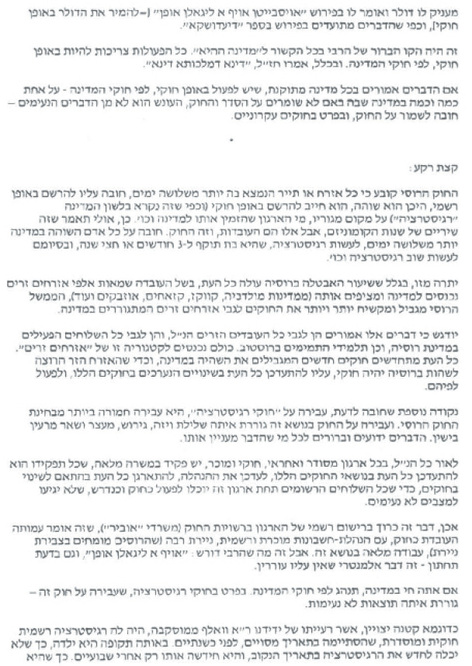 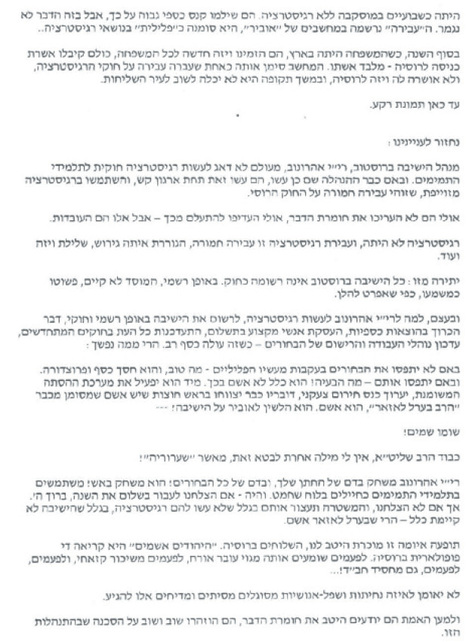 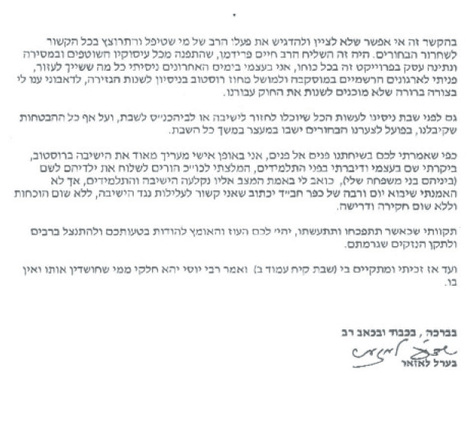 What follows is a rough translation:

Shalom and Blessings as befit a great rabbi,

The letter which you apparently wrote to me last week showed up today,  and it has apparently been publicized and distributed around the globe - but for some reason, I myself did not receive it until today.

I have not the slightest doubt that this letter was written as a result of the distribution of deliberately false information by men of low level, men of the depths, "anshei midyan", of narrow vision and corruption. [The information they provided you] should be regarded as we regard "lashon hara" received directly to the heart.

Chaza"l already taught us that a man is not judged at the time of his sorrow [or anger] and I learn z"chus that the issue of the financial well being ("parnassa") of your son-in-law, the Rosh Yeshiva in Rostov clouds your [normally] clear thinking to the point where you write this letter which is full of the shedding of blood, covering up the truth, slander and denigrating accusations - and all this is based on the evidence of this same woman, without any proof and without any investigation or questioning.

To my great sorrow, your letter is full of things which are far removed from the truth which could be easily disproved if the truth was only to be looked for.

And in particular, this woman has herself a great part in the accusation related to in this whole affair. She's the one who complicated things for them [the Rostov yeshiva] as will be explained below.

To our great misfortune, we are witnessing in these hours the opening of a new campaign of provocation up to a point of brainwashing, [telling us] who are the guilty ones in this affair, and who is directly tresponsible for the arrest of the talmidei hatmimim and for their expulsion from Russia. Without shame or misinterpretation, the patron of the yeshiva Rabbi Y.Y. Aharonov and his spokesmen are declaring publicly that the people directly responsible for this – it is not so and it never will be so and it is like putting filth in one's mouth to even say this  –  are shluchim of adoneinu moreinu rabbeinu [the Rebbe]            , myself and the shaliach of Rostov, Rabbi Chaim Friedman.

In the next few lines, I will present before you all the facts in their totality, without falsehood, and following that we will know with clarity who is directly responsible for this painful and sad affair. An affair which, with a little responsibility, a little concern and a little care for the welfare of the students, would never have happened.

All of us remember the words of the Rebbe when he was giving out dollars when a hassid, shaliach or any Jew was going to the Former Soviet Union - or before that when there was still yechidus - the rebbe would give the dollar and say, befeyrush, "oysbeyten oyf a ligelen oyfen" "use the dollar legally" the way this was described in the book " Diadushka".

This was the Rebbe's clear line with anything connected to "that" country. All our activities need to be performed in a legal way, according to the laws of the land. As chaza"l say, "dina d'malchusa dina".

Russian law states that any citizen or tourist who is there more than three days must register with the government and declare where he is staying, his place of residence, which organization invited him to the country, etc. Perhaps you can say this is leftover ["shirayim"] from the Communist Era, but those are the facts and this is the law. Everyone who is in the country more than three days has to register ["registrazia"] which is valid for three months or six months - and then do it again [before that time period elapses].

Moreover, because unemployment is rising at the moment in Russia, and because hundreds of thousands of foreigners are entering the country (from Moldova, the Caucases, Kazakhstan and others) and flooding it, this is causing increasing restrictions regarding foreigners staying in the country.

It should be pointed out that these laws apply to all foreign citizens including rabbis working in Russia as well as the students in the Rostov yeshiva. All these fall under the category of foreign citizens. These laws are constantly being renewed and tightened and any foreign citizen has to regularly acquaint himself with these changes and adapt accordingly.

Another point we should know is that a violation of the registrazia laws is a major felony according to Russian law and violation of these laws leads to cancellation of visas, expulsion, detention and other "marin bishin". This is clear and known to everyone who is affected by these laws.

Because of all this, all legal and organized organizations employ a full-time worker whose job is to keep up with all this legislation, to inform the organisation of changes, to make sure that none of their representatives work illegally and that they do not find themselves in uncomfortable situations.

This of course requires the organization to be legally registered with proper accounting and paperwork - but this is what the Rebbe demanded - oyf a ligelen oyfen - an elementary thing of which no one has questioned.

If you live in the country, behave according to that country's laws. And particularly with registration laws because breaking them leads to unpleasant consequences.

As a small example to illustrate the problem - when the wife of our friend, Reb A. Wolf of Moscow, her registration was completely legal but it ended on a certain date two years ago. At the same period she was giving birth so she couldn't renew her registration so missed the official date. So she renewed it two weeks late and was therefore in Moscow for two weeks as an unregistered alien. They paid a very heavy fine for this but it didn't stop there. Her crime was registered on official computers and she is registered as a felon with regard to registation.

At the end of the year when the family was in Israel they requested a new visa for the whole family. Everyone got the visa apart from this woman. She was recorded on the computer files as a former violator of the law of registration and for a long period was prevented from returning on shlichut.

So much for the background.


To return to our subject in hand:

The administrator of the Rostov yeshiva, Rabbi Y. Y. Aronow never legally registered the yeshiva's students. And where they did register, they did it under the name of a straw organization, using faked registration, a severe breach of Russian law.

Maybe they didn't understand the severity of their actions, maybe they preferred to ignore it, but those are the facts.

There wasn't any [legal] registration and that is a severe breach of the law which leads to expulsion, cancellation of visa and more.

Moreover, the Rostov yeshiva wasn't itself legally registered. Officially, it didn't even exist.

In fact, why should Rabbi Y. Y. Aronow  register the yeshiva officially and legally, which would lead to major financial expense, the employment of professionals, keeping up with new legislation, registering all the boys - when all that costs a lot of money? Why bother?

As long as nobody catches the boys for their offences, so much the better and he has spared himself all the money and the procedure. And when they are caught, what's the problem? It's not his fault. He can call out his well-oiled provocation machine. He can call an emergency meeting with shrieking delegates. His spokesman can blast from the rooftops that there is already a guilty party marked out. "Harav Berel Lazar. He's the guilty one. He told the authorities about the yeshiva."

K'vod Harav shlita, I have no other word to express this. Its simply an outrage.

Rabbi Y. Y. Aronow is playing with your son-in-law's blood. And with the blood of the bochrim. He's playing with fire. He's exploiting yeshiva students like soldiers on a chess board. He thinks if we get through the year, Baruch Hashem. If we don't succeed, and they get arrested because the yeshiva doesn't even officialy exist, then anyway it's Berel Lazar who is at fault.

This terrible phenomenon is very well known to us, the shluchim in Russia. "The Jews are guilty," is a very popular slogan in Russia. Sometimes we hear it from a goy passing in the street, sometimes from a drunk Kazakh, and sometimes, sometimes, from a Chabad hasid.

It's unbelievable to what sub-human level these provocateurs are prepared to descend.

To tell the truth they well understand the severity of their actions and they've been warned again and again about the dangers of this kind of behavior.

Here, it's impossible not to point out the tremendous work of the person who worked so hard to free the bochrim, HaShaliach HaRav Chaim Freedman, who took time off from all his other work and devoted himself to this project. I, myself, over the last few days tried everything in my power to help. I contacted official organizations in Russia and appealed to the Governor of the Rostov region in an attempt to change the decree but they told me that the law cannot be specially changed just for us.

Also, before Shabbat we tried everything to get the bochrim back to the yeshiva or to the shul for Shabbat but even after many promises made to us, the bochrim sat in jail throughout Shabbat.

As I told you in our discussion face-to-face, I greatly value the yeshiva in Rostov. I have visited there myself and spoken to the students. I have encouraged parents to send their children there (including members of my own family). I am really hurt by the current situation in which the yeshiva and its students find themselves, but I would never have believed that the day would come when the rabbi of Kfar Chabad would write without any proof and without any investigation that I was connected to false accusations against the yeshiva.

My hope is that when you have turned over eveything and thought it through  you will have the strength and courage to admit your mistake and apologize publicly and to correct the damage you have inflicted.

Until then, I hope to have the merit to be fulfill (Tractate Shabbat, page 118b) "And Rabbi Yosi said, "May my portion be among those who are wrongly suspected."

Bivracha, with respect and great pain,

Berel Lazar's response to Rabbi Ashkenazi's accusation is posted below. If you have the time and ability to translate, please do so and send it to me in the body of an email (no attachments, please) and I'll post it.

Click the link immediately below for Rabbi Lazar's letter and a rough translation: