Chief Rabbi of Kfar Chabad Accuses Chabad's "Chief Rabbi of Russia" Berel Lazar – Did Lazar orchestrate the expulsion of Chabad yeshiva students from Russia and the closure of their yeshiva? 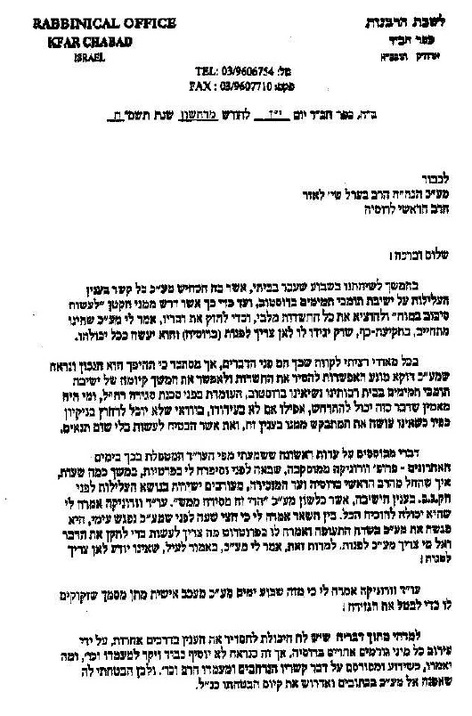 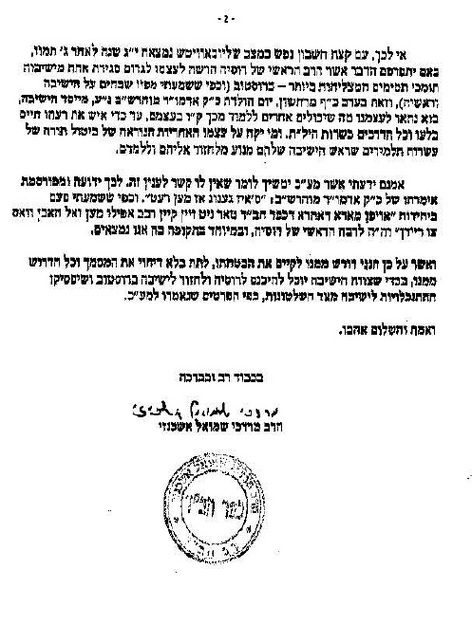 Rabbi Ashkenazi is reacting to this.

I'll try to post Rabbi Lazar's response tonight, along with a translation. Meanwhile, a translation of this letter is posted here.

[This is a rough translation. If you notice any mistakes, please point them out in the comments section below. Thank you.]

Office of the Rabbanut of Kfar Chabad
17th Marchesvan
To His Honor, the Chasid of Chabad, Harav Berel P. Lazar, Chief Rabbi of Russia,

To continue our conversation last week at my house, during which his honour denied
any connection to the accusation made against Yeshivat Tomchei Temimim in Rostov, even
going so far as asking me to "turn my mind around" and to withdraw these suspicions from my heart; and, in order to strengthen his words, his honor said to me that he promises with his handshake that he only needs to be told who to approach [in Russia, specifically the Russian government and security services] and he will approach them to the best of his ability.

With all my being, I wanted to hope that such words were true but it appears
that the opposite is the case and that his honor has specifically ["davka"] prevented the
possibility of the withdrawal of these suspicions and to allow the presence of
Yeshivat Tomchei Temimim at the House of our rabbi and nasi [the Rebbe] in Rostov which faces the danger of being closed down, rachmana litzlan. And who would believe that such a thing could happen without his [Rabbi Lazar's] appeal and certainly he [Rabbi Lazar] cannot claim that his hands are clean in this affair when he has not done what is required of him and what he unconditionally promised so to do.

My words are based on first-hand evidence which I heard from the lawyer who has
been dealing with this issue in recent days, Professor Voronika from Moscow who
came to me and told me privately over many hours how from the Chief Rabbi of
Russia [Rabbi Lazar] right through to the secretary they were involved with this
affair dealing with the Russian secret police apparatus over the issue of the
yeshiva and in the words of his honor, "this is mesirah mamash". [Mesira literally means informing on Jews to non-Jewish authorities and is under many circumstances forbidden by Jewish law.]

The lawyer Voronika told me she could prove it all. Among other things, she told
me that half an hour before his honor met me, she met his honor at the airport
and told him what to do to undo this affair and who his honor should approach in
Russia. In spite of this, his honor said to me in his own words that he does not
know who to approach.

The lawyer Voronika said to me that for a week already his honor [Rabbi Lazar] has personally prevented the granting of a document needed to annul the evil decree ["gezeira"].

I learned from her words that she has the ability to straighten out this issue in a number of ways by involving different parties in Russia but that doing this would detract from [Rabbi Lazar's] honor and glorious standing because his wide contacts and high standing are well known and publicized. [In other words, the lawyer claims she can fix the problem without going through Rabbi Lazar but if she does so it will make Lazar look weak and impotent.]

Therefore I promised her that I would approach his honor by letter and request
that he keep his promise as outlined above.

Therefore, with a little soul-searching ["cheshbon nefesh"] at a time when
Lubavitch is 13 years after Gimel Tammuz [the Rebbe's passing] that it
should be publicized that the Chief Rabbi of Russia allowed himself to cause the
closure of one of the most successful of Tomchei Temimim Yeshivot in Rostov (and
of one that I heard compliments about the yeshiva and its teachers from his own
mouth); and this on the eve of 20th Marchesvan, the birthday of the Rebbe
RaShaB, [the 5th Lubavitcher rebbe], the founder of the yeshiva.

Let us present to ourselves what others should learn from this episode and [understand] who
will assume the terrible responsibility of bitul Torah [time wasted not studying Torah] of tens of yeshiva students because their rosh yeshiva is prevented from returning to teach them.

Although I am aware that his honor continues to say that he has no connection to
this issue, it is known widely and publicized the saying of the Rebbe RaShaB
"siz genug az mein reyt" ["it's enough that they're talking about
you"] and as I heard in yechidus [a private meeting with the Rebbe], "oyfen moro deasro dekfar chabad, tor nit zeyn keyn revov afilu men del habe vos zu reydech" [for the rabbi of Kfar
Chabad, even if it's only the slightest suspicion, it's bad enough that they're
talking about you"], even more so for the Chief Rabbi of Russia –
particularly the age in which we are living.

And therefore I ask [Rabbi Lazar] to keep his promise, to give without delay the
document and anything which is required from him in order that the staff from
the yeshiva can enter Russia and return to the yeshiva in Rostov, and that the
attacks on the yeshiva by the authorities should cease, according to the details
related to his honor [Rabbi Lazar].

Chief Rabbi of Kfar Chabad Accuses Chabad's "Chief Rabbi of Russia" Berel Lazar – Did Lazar orchestrate the expulsion of Chabad yeshiva students from Russia and the closure of their yeshiva?

Rabbi Ashkenazi is reacting to this.

I'll try to post Rabbi Lazar's response tonight, along with a translation. Meanwhile, a translation of this letter is posted here.