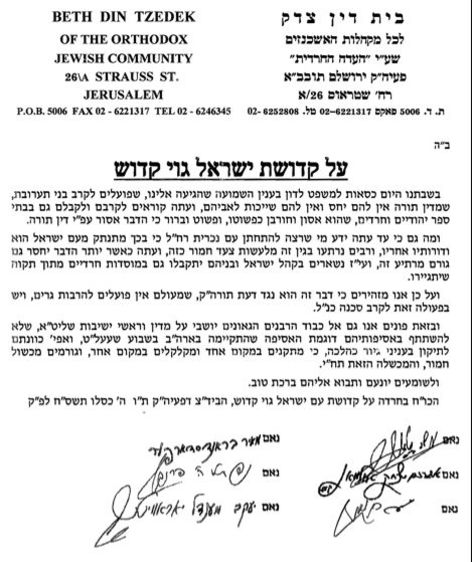 The English-language translation follows after the jump …

This is the English-language translation, just as sent by the translator, with no corrections or emendations:

5th of Kislev 5768
Concerning the Holiness of the Jewish People – the Holy Nation.

The senior dayanim of the Bedatz met today to discuss allegations that certain kiruv activists are actively proselytizing the children of intermarried couples to convince them to convert – even though according to Torah law there is no halachic relationship with their Jewish fathers. They are calling for the acceptance of these non-Jewish children in Jewish programs and religious schools. Such an action is literally a disaster and self-destructive. It is self-evident that such a program is absolutely prohibited by the Torah.

Furthermore until now anyone who wanted to marry a non-Jewess – Heaven forfend! – knew very well that this act would sever them from the Jewish people forever. Because of the dire consequences of intermarriage, there was a strong barrier that prevented many from intermarrying. However now that the consequence of exclusion from the Jewish people has been removed - this motivation not to intermarry has been lost. Consequently these intermarried couples and their children remain amongst the Jewish people. This results in their non-Jewish children being accepted into religious schools out of the hope that they will eventually convert.

Therefore we are warning that this activity is against the Torah. It has never been acceptable to proselytize non-Jews. Furthermore as we mentioned it actually encourages intermarriage.

We therefore are turning to the poskim and the roshei yeshivos not to participate in their conventions - such as the one that occurred in America last week. Even if their motivation was to improve the standards of conversions – they are making improvements in one area while making things worse in another. This approach is directly causing serious problems.

Those who heed our cautions will benefit and receive blessings.

We - the members of the Bedatz in Jerusalem - affix our signature to this document out of fear and concern for the holiness of the Jewish people – the holy nation.

Rabbi Moshe Feinstein encouraged the conversion of non-Jewish spouses. In part, the logic is the two are already living together and enjoy all the benefits, so to speak. Refusing to convert the non-Jewish spouse will not stop that situation from continuing. Therefore, any non-Jewish spouse who shows an interest in converting should be converted.

Badatz Yerushalayim also appears to conflate two issues, the first proselytizing non-Jews married to Jews and the second accepting non-Jewish children (whose father is Jewish) into community schools and synagogues with the hope that these children will opt to convert. (Or, more likely, that the non-Jewish mother and the children will together opt to convert with the support of the Jewish father.) Again, Badatz Yerushalayim ignores halakhic decisions made by other rabbis, including Rabbi Moshe Feinstein. It is as if those rulings were never made and do not exist.

Rabbis need to look at all sides of an issue. They need to acknowledge views they disagree with and explain that disagreement. In short, they need to play fair and be honest – two things rabbis no longer seem able to do.

Eternal Jewish Family is a bad deal for many reasons, primary among them the manipulative and dishonest behavior of its founder and leader, Rabbi Leib Tropper. But Rabbi Tropper's failings and EJF's machinations do not make Badatz Yerushalayim correct. If anything, this latest declaration from Badatz Yerushalayim only proves it to be on par with EJF's sins, not levels above them.

The English-language translation follows after the jump …