A Quiz To Rock Your Faith

Answers and supporting documentation after the jump…

The point? The Egyptians had all this first.

More and more, it seems we were first Egyptians and only later Israelites. And it also seems that our religion is not much more than a copy of the ancient Egyptian, with some new rationalizations thrown in  for good measure.

Stephen Gabriel Rosenberg says the bright spot in all this is that it "proves" the Exodus by "proving" we were in Egypt, but I don't see why that would be so – Egypt was a regional power active in Canaan. Indeed it occupied Canaan several times in antiquity and Canaan was a province of Egypt for some time.

If anything, all this proves is that the ancient Israelites looked to Egypt and Egyptian culture in the same way that Israelis today look to America for many of their cultural cues.

Wouldn't it be ironic if "Yiddishkeit" really turned out to be clinging to an ancient version of cultural assimilation?

UPDATE: DovBear notes that there is a preponderance of archaeological evidence showing the Egyptian priestly caste (i.e., the intellectuals and power brokers of ancient Egypt) were circumcised.

And Ben Noah notes in the comments to this post that the Philistines wore a version of tzitzit, ritual fringes.

If you know of other ritual items, etc., borrowed from other cultures, please post them in the comments. Thank you.

Tefillin - made in Egypt?

So many Jewish cultic practices come from ancient Egypt that it's not surprising to see Egyptian monuments showing the Pharaoh wearing a headdress that looks like the tefillin - phylacteries - worn during prayer by observant Jews.

In many depictions, Pharaoh is shown wearing a snake crown from which there projects above his brow a sacred asp or viper and a cobra in aggressive attitudes. They represent the Pharaoh's power of protecting his land by means of serpents that can both defend the land and attack the enemy when necessary.

Such powers were essential to the rulers of Egypt, whose rich but extended land was always in danger of invasion from the less fortunate peoples of the surrounding deserts.

The deities that supported the Pharaoh also wore appropriate headgear, but in their case not on the brow but further up on the head, above the hairline. In many cases this headgear was in the form of an animal's head, such as the jackal or the ibis-bird; but in some cases it was just a small black box on a black plate.

Was this a form of tefillin?

A case in point is the goddess Isis, who stands behind her deceased husband, the Pharaoh Osiris, wearing such a black box on her head, as depicted on the mummy of Kep-ha-eses of the second century BCE in the Copenhagen Glyptotek Museum.

Another example comes from the tomb of Anher-Khaou in Thebes, of 1,000 years earlier, where it is again the lady Isis wearing a black, box-like headdress, leading a boat-load of gods that take the deceased to his place in the next world.

What was this black box? 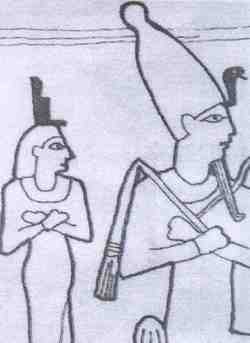 It has a stepped profile and represents the royal throne of the dead Pharaoh Osiris, who ruled over the next world. Isis, his sister and wife, by wearing this black box, could assist the suppliant to reach the world of everlasting life presided over by Osiris.

THE CHILDREN of Israel during their sojourn in Egypt must have been familiar with such depictions, and with the concept of the ruling classes of the country wearing headgear symbolic of their physical and cultic functions. Whether we see these local customs in a positive or negative light, they were representative of the country from which the Israelites were being evacuated. Indeed, a reminder of such customs was to be one purpose of the tefillin, which were to be a "remembrance between your eyes... that with a strong hand the Lord brought you out of Egypt" (Exodus 13:9).

However, in another passage the tefillin to be worn on the head are described as totaphot (Deut. 11:18), which is a completely obscure biblical word. Much later, the rabbis of the Mishna take it to mean just an ornament, but the great Rabbi Akiva looks at the origin of the word and derives it from a doubly foreign source. Alluding to the four sections of the head tefillin, he claims it means two and two in the languages of "Katpi" and "Afriki" (Talmud Sanhedrin 4B), which sound like Coptic and Egyptian. In Rabbi Akiva's view, then, the connection to Egypt is clear.

THIS CONNECTION of one of our most sacred artifacts to Egypt should not surprise Orthodox Jews. It is a connection that applies throughout our religion, and is especially manifest in the details of the Tabernacle that travelled throughout the wilderness with the Children of Israel.

The Tabernacle, being a tent in a large courtyard, is very similar in layout to the camp of Rameses II before the battle of Kadesh in Syria.

The Hebrew Tabernacle, after all, was also a shrine that was carried out to battle, but the analogy goes deeper. The tent of Rameses is divided into two parts, and the smaller inner sanctum contains a deity protected by two winged beings, not unlike the cherubim described as guarding the Holy Ark.

Just as only the High Priest was allowed into the inner sanctum, so it was only Rameses, earthly representative of his god, who was allowed to enter this chamber.

THE OUTER altar of the Tabernacle is clearly related to other religious practices, but it is interesting that the inner, or golden, altar was only for incense and spice offerings. This was unusual in pagan practices except in Egypt, where animal sacrifices were frowned upon and often forbidden, and where most altars were devoted to meal and incense offerings.

More controversial is the source of the table of bread offerings, the Lehem Hapanim - literally "bread of faces" - that was to be renewed by the priests on a weekly basis. We see from the story of the young David running away from Saul that this was the practice among the priests of Nob (1 Samuel 21:7), but what was its origin? Did the priests need this bread? Or, indeed, did the Lord need it?

IN ANCIENT Egypt, during the Old and Middle Kingdoms, every person of importance was given a handsome tomb with a door through which the relatives could feed the deceased in his afterlife. Obviously this became a bit of a burden for the living, to feed the dead every week, so the task was given over to the priests, but they also found it to be a burden.

Eventually it was done symbolically by erecting a stone table at the door of the tomb and showing a whole collection of food that was considered to have been given to the occupant. At the centerpiece of this carving there was always a table of bread, consisting of a number of loaves, varying from 16 to eight, always arranged in pairs, facing in opposite directions, on top of the table. The bread was facing in two directions; it was literally "bread of facings."

THE INTIMATE relationship of the Tabernacle and other items of our sacred artifacts to Egyptian models may, on the surface, be anathema to our Orthodox brethren. But it should not be so.
On the contrary, it is evidence that our people did come out from an Egyptian culture, and so refutes Bible scholars who seek to discount the story of the Exodus.

The details of the Exodus may be unverified, but those of the Sojourn are clear. Our own Book of Books, pointing again and again to the intimate connection with the most highly developed culture of its time, should convince critics that the Israelites did indeed do time in Egypt.

The writer is a Fellow of the Albright Institute of Archaeological Research, Jerusalem.

A Quiz To Rock Your Faith

Answers and supporting documentation after the jump…