« The Bible Told Them So Waaaaay After The Fact | Main | Rabbi Herbert Bomzer: Mondrowitz Escaped To Israel, Drop The Case »

The Pope and the Holocaust: A (Partial) Response To Dovbear [UPDATED 7-28-06]

DovBear asks why I carry a brief for Pope Pius XII and the Church. I do not. I simply seek the truth, and the truth in this case supports the Church. I made scans of (part of)  Sir Martin Gilbert's endorsement of Rabbi David Dalin's book defending Pius. Page 1 appears immediately below; page 6 is posted after the jump. Please click on the images to enlarge: 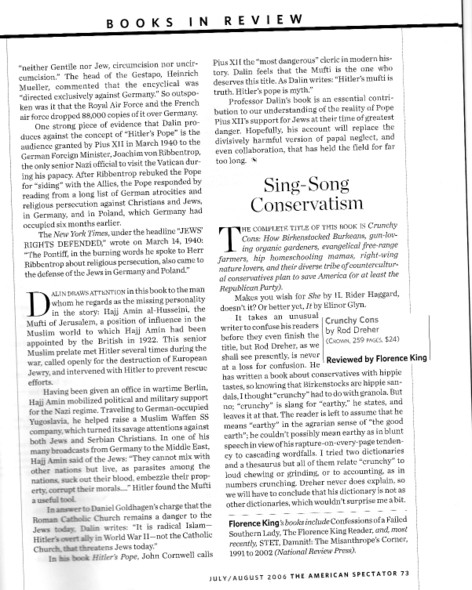 7-27-06: I just noticed that the American Spectator and Dalin something the Spectator does not note, but should have. This plays into DovBear's stereotype of Republicans, but so be it.

[Amy Mitchell of TAS writes on 7-28-06: "The American Spectator is not part of, nor officially affiliated with Regnery Publishing. It is a fact that the former publisher of Regnery is now our publisher, but we are in fact two different companies." Of course, I never wrote that TAS and Regnery were the same company or part of the same company. I only wrote that they shared a publisher. It turns out that Alfred REGNERY is no longer the publisher of the house that bears his name. Does he retain a financial or other interest in Regnery? If he does, my point is absoultely correct.***]

I took down part of the review, because TAS (finally) responded by saying they "most likely would" have allowed me to put up an excerpt with a link over to their website (which would have been a link to a subscription offer, I think), if I had asked them first. But of course, I did ask. They did not respond. This lack of response would weigh heavily on the side of fair use. And I could have excerpted the review myself, without their permission, because legally none is needed. (I did not do this because I've been typing one-handed for a couple of days due to an injury.)

TAS could still do exactly what they "most likely" would have done. But they "most likely" will not, because the issue here is not the truth or the message, it's money (or, at least, the idea of money). So those of you anti-Church fanatics who want to read Gilbert's review will have to go buy it. Of course, most of you will not do that. You do not want to be disabused of your firmly held notions.

[On 7-28-06 Amy Mitchell writes: "But you did not in fact ask our permission to post our article … you merely asked if we were going to post it so you could link to it … we always appreciate our content being widely distributed and read – if permission is requested first, through official channels."

In other words, Mitchell contends my email requesting a link to Gilbert's review is not the same as a request for a reprint. If I had requested a reprint, I would have, most likely, been approved. But I "only" asked for a link. This in her mind justifies her failure to respond to my request.

Of course, it does not do so. I hoped TAS would respond by saying the link will be up on a particular date, and perhaps an offer to let me link to it earlier. Instead, the crack staff at TAS chose to ignore the request for the link, when they would have approved a request for a reprint!

Most of Gilbert's review is information from Dalin's book. This is allowed under failr use and copyright law for the purpose of review. But it does not give TAS control over that information. Gilbert's contribution to the work is largely – although not by any means exclusively – his endorsement of Dalin's conclusions and the specific information from Dalin's book printed in that review. That endorsement is significant – and highly newsworthy. It certainly falls under fair use.

What I did instead was to post the entire review, for two reasons: 1) Because Gilbert's reputation was under attack and the review's posting blunted that, and 2) because I was typing with only one hand due to an injury.

Reason one also contributes to fair use. Reason two does not, and is not valid.]

Stellar staff you have, Regnery.

Alfred S. Regnery
Alfred S. Regnery is President of Regnery Publishing, Inc. (Book Publishers), formerly Regnery Gateway, Inc., since 1993 a subsidiary of Eagle Publishing, Inc.. Regnery Publishing was founded in Chicago by Alfred’s father, Henry Regnery, in 1947. Alfred is also a practicing attorney and is Of Counsel to the Washington Law firm of Keller and Heckman. He served as Administrator of the Office of Juvenile Justice and Delinquency Prevention and as Deputy Assistant Attorney General, Land and Natural Resources Division, both at the U.S. Department of Justice, between 1981 and 1986. Previously he served as Minority Counsel, Senate Judiciary Committee and Chief Minority Counsel, Administrative Practice and Procedure Subcommittee. Prior to government service he practiced law for six years in Madison, Wisconsin.

So we have a clear relationship between the publisher of Dalin's book and TAS, and my point – that this should have been noted by TAS (not by Gilbert), and not doing so is a clear ethics violation – stands. You'll also note Mitchell did not reveal this information, but she attacked me for noting a relationship.

The Pope and the Holocaust: A (Partial) Response To Dovbear [UPDATED 7-28-06]

DovBear asks why I carry a brief for Pope Pius XII and the Church. I do not. I simply seek the truth, and the truth in this case supports the Church. I made scans of (part of)  Sir Martin Gilbert's endorsement of Rabbi David Dalin's book defending Pius. Page 1 appears immediately below; page 6 is posted after the jump. Please click on the images to enlarge: