« Yated Ne'eman: Throat-Ripping At Rubashkin, Oral-Genital Contact During Circumcision Both Religious Freedom Issues – Government Has No Right To Tell Us What To Do – Links US Government Action To 'Czarist Russia' , Cooperation With Govt Sin | Main | PETA Ad Campaign Targets Rubashkin » 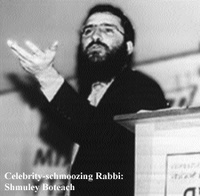 Rabbi Shmuley Boteach, the motor-mouthed conservative talk radio host and rabbi to the stars, believes that PETA's Rubashkin campaign has distorted shechita and made Jews look bad. But he won't defend Rubashkin shechita – because he cannot:

"My area of expertise is Jewish values and ideas, not Jewish ritual slaughter. So I will not defend AgriProcessor's seemingly incomprehensible practice of removing the animal's trachea after its throat is slit, or the company's practice of using upside-down pens, in which the animal is held in the air by its feet, to facilitate the shechitah."

Of course, as even a cursory look at the PETA video shows, the animals are upside-down, but are not held in the air by their feet and Rabbi Boteach won't deal with throat-ripping because there is simply no defense for it. That does not stop him from blaming PETA for Rubashkin's and his rabbis' sins:

PETA's devotion to animals may be laudable, but its so-called "exposé" of shechita is shameful, distorting Judaism's five thousand-year history of sensitivity to animals.

PETA has repeatedly stated that, done properly shechita is the most humane method of slaughter available. The only distortion here is Rabbi Boteach's.

Posted at 01:29 AM in Kosher Scandal | Permalink