Huge Chabad Anti-Disengagement Demo: Disengagement = Holocaust, Sharon = Haman & Milosevic, Civil War Hinted – "Who Is On The Lord's Side? Let Him Come Unto Me" 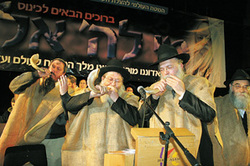 Jerusalem Post: Under the banner, "Arik Sharon, you are bringing upon us a Holocaust," and with pictures of the Lubavitcher Rebbe everywhere, thousands of demonstrators gathered Thursday night at the Jerusalem International Convention Center to protest the evacuation of settlements in the Gaza Strip and northern Samaria.

The demonstration was organized by the World Headquarters for Saving the Nation and the Land, headed by Rabbi Shalom Dovber Wolpo, a Chabad rabbi from Kiryat Gat.…

Rabbi Shalom Dov Kalmanson, a Chabad rabbi from Cincinnati, Ohio, appealed to US President George W. Bush, saying: "G-d appointed a leader to battle against evil, and you launched a war on Afghanistan and won quickly. You moved onto Iraq and won a surprisingly quick victory. But today you're having problems in Iraq. I believe one of the reasons is because of the road map. No man in history has ever forced Jews to battle Jews. It is a horrendous precedent."

Ynet: Activists handed out stickers proclaiming “Sharon, you are bringing a Holocaust upon us,” and leaflets warning that “in each one of the settlements there are more weapons than in the Warsaw Ghetto uprising.”

Ha'aretz: Thousands of anti-disengagement activists who attended a Jerusalem rally led by prominent rabbis in Jerusalem on Thursday, received a pamphlet accusing Prime Minister Ariel Sharon of bringing a holocaust onto the people of Israel.
"Your madness and that of your government will bring a terrible disaster to the nation of Israel, the like of which hasn't been seen in the Holy Land since the days of Titus and Nebuchadnezzar," the leaflet reads.

"Don't preach to us about not mentioning the Holocaust ... You are the one who has already brought a holocaust to thousands of dead and wounded in your licentious manner; and you are the one who is currently taking millions of Jews into the borders of Auschwitz," it continued.

Under the call, "Who is on the Lord's side? Let him come unto me," which served Moses after the sin of the golden calf [when the members of the tribe of Levi killed thousands of Jews who had worshipped the golden calf idol] and Matityahu the Maccabee against the Greeks, thousands convened in the Israel Convention Center for a symbolic mourning ceremony designed to express their sorrow and pain at the "plan to uproot and deport Jews from the Land of Israel."

The ceremony was led by Rabbi Gedalyahu Axelrod, a former judge at the Haifa Rabbinical Court. Axelrod urged those present - most of whom were from the messianic faction of the Chabad movement - to demonstrate "utter devotion" to the cause.…

Noam Livnat, who heads the Defensive Shield anti-pullout campaign, said that if the Israel Police is busy trying to quell stormy anti-disengagement demonstrations throughout the country, it will not have the manpower to implement the pullout. The Defensive Shield campaign has already collected the signatures of some 10,000 soldiers who say they will disobey orders to evacuate settlements.

The master of ceremonies, Noam Arnon, spokesman for the Jewish community in Hebron, [said] "We … are the students of Mordechai, not of Haman, and not of Ahashverosh, the corrupt king."

Huge Chabad Anti-Disengagement Demo: Disengagement = Holocaust, Sharon = Haman & Milosevic, Civil War Hinted – "Who Is On The Lord's Side? Let Him Come Unto Me"