« Putin Speaks At Auschwitz, Gets Chabad Medal, Doesn't Mention Murdered Jews | Main | UPDATE: The Times They Are A Changin'? »

Where Is Man? Where Is Rabbi Lazar?

Rabbi Berel Lazar, Chabad's 'Chief Rabbi' of Russia and Vladimir Putin's favorite Court Jew, has written a piece on the 60th anniversary of the liberation of Auschwitz published in yesterday's Wall Street Journal.

What is most memorable about Rabbi Lazar's writing?

Like his patron Mr. Putin, Rabbi Lazar's commemoration of the liberation of Auschwitz is memorable for what it is missing – any mention of the 1,300,000 Jews murdered at Auschwitz.

Instead, Rabbi Lazar gives us an uncanny repetition of Mr. Putin's speech, a repetition that stresses Mr. Putin's political agenda and his fight against Chechen terror. 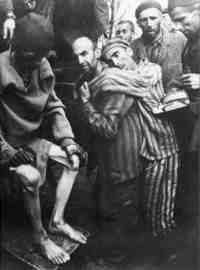 What is also striking is the utter absence of any mention of Russian antisemitism, this in a week that 500 prominent Russians – including members of the Duma, Russia's Parliament – signed a modern version of the Protocols of the Elders of Zion.

Rabbi Lazar correctly points out that the question raised by the Holocaust is not simply "Where was God?", but the answerable question "Where was man?".

That question can justifiably be asked of Rabbi Lazar, who as these posts (click and then scroll down) will show you, has shamelessly used the 60th anniversary of the liberation of the greatest hell-on-earth man has ever known to promote his – and his patron's – political agenda.

Unfortunately, in this case the answer to the question is clear.

Where is man? Where is Rabbi Lazar?

To his shame, Rabbi Lazar is bought, sold, paid for and under the thumb of his patron, Vladimir Putin. 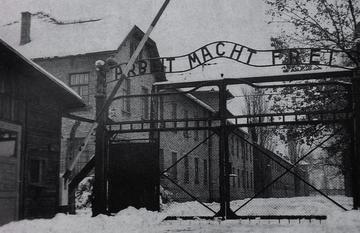 MOSCOW, Russia - When remembering the tragedy of the Holocaust, as world leaders will today at the 60th anniversary of the liberation of Auschwitz, we are faced with the eternal question: Where was G-D?

No mortal can ever attempt to explain G-D's mysterious ways. As the prophet Isaiah tells us in the name of G-D: "My thoughts are unlike your thoughts." However, what we can say is that when humans suffer G-D suffers as well, even more than a parent for a child.

Yet G-D gave man free will to change the world for the better, and we must say that our independence is so vital that it outweighs the profound pain resulting from man abusing his free choice to hurt his fellow man. It is clear to me that 60 years ago G-D was surely watching and waiting for an answer to an even more important question: Where is man?

Where is man who can differentiate between good and evil, who has the power to act and create? Where is man who understands the sanctity of human life, and why is he not crying out at its desecration?

Yes, the world united then in an unprecedented way, and succeeded in stopping the Nazi war machine. But why did it take so long? Why was the world so willing to believe that appeasing evil would restrain it? Why did the Allies react offensively only when the Nazis reached their doorstep? Why did so many innocent people have to be brutally murdered before humanity realized the intrinsic evil of Nazism?

So we cry out: never again.

But sadly, today we face the Nazism of the 21st century -- terrorism. Once again, we must ask ourselves, where is man in the face of this new evil threat?

Terrorists want the same thing as the Nazis: world conquest. Like the Nazis, terrorists don't discriminate. They despise all civilized people -- whether it is a business executive in New York or a teenager eating a slice of pizza in Jerusalem, a child on the first day of school in Beslan, a commuter in Madrid or a tourist in Bali. To them, the world is divided between "believers" like themselves -- the "supreme race" -- and all others -- "infidels."

No nation, no matter how powerful, can afford to fight this war alone. The entire Free World must unite for the sake of humanity. The new enemy must be clearly defined, a new alliance must be formed, resources pooled and the enemy defeated.

The events of 60 years ago -- both our tragic hesitation to face the enemy and our ultimate alliance and victory -- teach us the single most critical lesson in human history: The bedrock of a civilized world is the belief in the Almighty Creator, who endowed all human beings with equal rights. As my great rebbe, Rabbi Menachem Mendel Schneerson, would often say: "The key to all morality and decency, peace and coexistence is ultimate accountability -- faith and trust in an Almighty 'Eye that sees and Ear that hears' all our actions and behavior. Human life is a precious gift endowed to us by the Creator and it is the duty of mankind to guard it closely."

We can't wait for terrorism to strike to realize its danger. A force that has no respect for human life and liberty is a threat not only to those within its reach, but to people everywhere -- to the very essence of freedom and life itself. The Bible in Deuteronomy states: "You shall appoint judges and enforcers in all your cities." Deterrence is the power of justice, and laws are the foundation of a secure and safe world. A new international alliance, backed by the rule of law, will, it is hoped, be so powerful that it will protect the world simply by its presence without firing a shot.

This unified alliance depends on us. Let today be the day that all civilized nations embrace the universal divine law that respects the sanctity, dignity and liberty of every man, woman and child on this planet.

If diverse nations could unite 60 years ago for the sake of man's survival, how much more so today, when our value systems have grown so much closer?

Where Is Man? Where Is Rabbi Lazar?

Rabbi Berel Lazar, Chabad's 'Chief Rabbi' of Russia and Vladimir Putin's favorite Court Jew, has written a piece on the 60th anniversary of the liberation of Auschwitz published in yesterday's Wall Street Journal.

What is most memorable about Rabbi Lazar's writing?

Like his patron Mr. Putin, Rabbi Lazar's commemoration of the liberation of Auschwitz is memorable for what it is missing – any mention of the 1,300,000 Jews murdered at Auschwitz.

Instead, Rabbi Lazar gives us an uncanny repetition of Mr. Putin's speech, a repetition that stresses Mr. Putin's political agenda and his fight against Chechen terror.