Should The Allies Have Bombed Auschwitz? 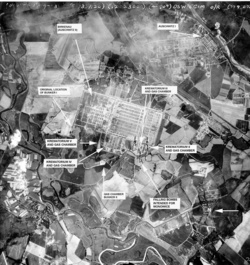 Should the Allies have bombed Auschwitz? Sir Martin Gilbert addresses this issue in today's London Times.

His short answer? No.

Sir Martin points out that the time period when the Allies first learned about Auschwitz coordinates with the planning and implementation of the D-Day Landing, and that the Allies reason for not bombing the rail lines to Auschwitz or the crematoria were, 1) because their resources were stretched too thin because of D-Day and, 2) the actions of a representative of the (Zionist) Jewish Agency and a British intelligence agent stopped the deportations from Hungary to Auschwitz without the bombing:

One of the British agents in Switzerland, Elizabeth Wiskemann — later a distinguished historian of interwar Europe — supported the dispatch of a telegram from [the Jewish Agency's Richard] Lichtheim to the Foreign Office in London, giving full details of the hitherto “unknown destination” and making six requests.

The first request was to give the facts the “widest publicity”. The second was to warn the Hungarian Government that its members would be held responsible for the fate of the Jews being deported from Hungary. The third that reprisals be carried out against Germans being held in Allied hands. The fourth request was for the “bombing of railway lines” from Hungary to Auschwitz, and the fifth for the precision bombing of the death camp installations. The final request was for the target bombing of all collaborating Hungarian and German agencies in Budapest. The telegram gave the names and addresses of 70 Hungarian and German individuals who were stated to be most directly involved in sending Jews from Hungary to Auschwitz.

On Wiskemann’s inspiration, this telegram was sent uncyphered, to enable Hungarian Intelligence to read it. They did so, and took it at once to the Hungarian Regent, Admiral Horthy, and his Prime Minister, Dome Sztojay.

The request for bombing was followed six days later, on July 2, by an entirely unconnected and unusually heavy American bombing raid on Budapest. The target was the city’s marshalling yards, but many bombs fell in error on government buildings — some mentioned in the telegram.

This seemingly rapid response to the Swiss appeal caused consternation in Budapest. On July 4, Admiral Horthy summoned the senior German official in Budapest, SS General Edmund Veesemayer, and demanded an immediate end to the deportations. Veesenmayer hesitated. Two days later, the Prime Minister repeated the demand. Lacking the military power to force the Hungarian police and railway workers to continue the deportations, Veesenmayer ordered that they end. The last deportation from Hungary took place that day and with it the last major forced removal of Jews to Auschwitz. A chance American bombing raid had stopped the deportations: 380,000 Hungarian Jews had been murdered there.

Also on July 6, a further request for bombing reached London, brought by Chaim Weizmann, head of the Jewish Agency. The next day, Anthony Eden, the Foreign Secretary, put it before Winston Churchill, who responded: “Get anything out of the air force you can, and invoke me if necessary.” Eden passed on Churchill’s request to the Air Ministry at once, noting: “I very much hope that it will be possible to do something. I have the authority of the Prime Minister to say that he agrees.”

But bombing was no longer needed. The deportations to Auschwitz from Hungary had ceased. The 150,000 Hungarian Jews who had escaped deportation by only a few days now had another priority: international protection inside the city from further German or Hungarian Fascist assault. This protection was provided by the neutral embassies in the city: the Swiss, the Portuguese, the Spanish and the Swedish. At the request of the War Refugee Board, the Swedish government sent Raoul Wallenberg to Budapest to take part in this protective work. He reached the city three days after the halt of the deportations to Auschwitz. This rescue effort, of which he became a central part, was coordinated by the Vatican representative in Budapest, Cardinal Angelo Rotta. In recent years, Wallenberg and the other diplomats have all received recognition for their work. Now, Wiskemann, a Briton, deserves hers, as we commemorate the 60th anniversary of the liberation of Auschwitz.

I've heard many rabbis – from the JDL's Meir Kahane to Chabad shlukhim and Aish HaTorah outreach workers – blame the Allies for not bombing the rail lines leading to Auschwitz. It is also a favorite topic of politicians and activists from Israel's right wing, and of course from anti-Zionist rabbis in Brooklyn and Monsey.

Yet, from Sir Martin's article it seems that the Allies did all they could reasonably have done under the circumstances, and in any case the Hungarian deportations were stopped within 18 days of the American government's notification of the existence of Auschwitz.

Should The Allies Have Bombed Auschwitz?

Should the Allies have bombed Auschwitz? Sir Martin Gilbert addresses this issue in today's London Times.

His short answer? No.