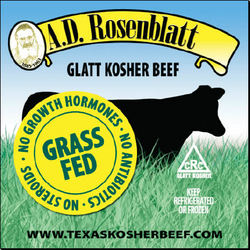 According to Rabbi Sholem Fishbane of the Chicago Rabbinical Council, the new CRC-supervised Texas-based glatt kosher beef production uses an ASPC-style upright pen with a belly lift and other features recommended by Dr. Temple Grandin.

I have also heard from food industry sources – but have not yet been able to confirm – that Dr. Grandin  had some involvement in setting up the process.

Rabbi Fishbane has also informed me that the production has moved from the plant mentioned in this article to a new (and presumably larger) plant.

The Difference Between A True Leader And One Who Is Not

The Jerusalem Post has a story about non-Chabad rabbis from the FSU and Eastern Europe meeting with Israel's President, Moshe Katzav:

In a similar context [Rabbi Goldschmidt] noted that Rabbi Avraham Shayevitch, the former Chief Rabbi of the Soviet Union who had shepherded his flock back to some form of identification with Judaism, had paid a heavy price for a letter that he wrote four years ago to President Vladimir Putin requesting that Russia not sell arms to Iran.

Compare that to the behavior of Vladamir Putin's court-rabbi, Chabad's Berel Lazar.

FailedMessiah.com can exclusively report that Rubashkin's previous USDA trouble involved more than 40 violations (with one supplier alone) over a 10 month period.

Many of the checks were dated one day, run through a postage meter a day or two later, and then postmarked by the Post Office several days after that, giving the appearance of knowingly violating US law while attempting to deceive the supplier in question and the USDA.

The dispute between the Falash Mura community in Addis and NACOEJ has escalated once again.

"The [Ethiopian] government has made up its mind to kick out NACOEJ," Enyew told JTA. He also called NACOEJ a "mafia-like" organization and said the government plans to imprison the group's workers.

FailedMessiah.com can exclusively report that one of the Ethiopian principals in this dispute is alleged to have been removed from his position twenty-one years ago as an Israeli-backed community organizer in Sudanese refugee camps because of allegations of theft and misuse of funds meant for refugees.

Perhaps forces agitating against Falash Mura aliya have taken matters on the ground into their own hands. Let's hope no one dies or languishes in an Ethiopian prision because of this.

You can read the JTA article here.

Fotheringay-Phipps has posted an interesting story about the late Chabad-Lubavitch Rebbe, Menachem Mendel Schneerson, on Hirhurim:

Menachem Lubinsky, head of Lubicom, the Kosher Trade and Marketing organization that stages Kosher Fest, has a long op-ed in this week's Jewish Press attacking PETA and rabbis from the Reform and Conservative movements.

From the day PETA released the video it surreptitiously filmed at Agri, the organization practiced deplorable libelous and slanderous spin.

Israel's Chief Rabbinate was duped into equating its position – not to make an immediate second cut so as not to make it appear that two Jewish shochtim performed the shechita – with a condemnation of second-cut practices at Agri performed by a non-Jew.

I wonder if Mr. Lubinsky realizes that he has exposed himself – and perhaps his clients – to legal jeopardy in making these remarks.

You can read it all – along with hyperlinks to some facts that contradict Mr. Lubinsky's assertions – after the jump.

A new glatt kosher beef producer has opened in Texas:

The puzzled ranchers, all devout Christians, didn't know that "glatt" was Yiddish for "smooth," the highest quality of kosher beef. Then the rabbis broke into smiles needing no translation.

You can read all about it here.

You can visit Texas Kosher Beef here. (No word yet on the type of pen or restaining device used.)

I have just awarded Tzemach Atlas with the newly-minted special award for "The Funniest Anti-Chabad Line Ever Written":

[Caution! This is graphic, profane and not suitable for children or graduates of Lakewood.]

Another Expert Speaks Out Against Rubashkin

Continue reading "Another Expert Speaks Out Against Rubashkin" »

Russia's Chabad Chief Rabbi Berel Lazar, the personal Court Jew of Vladamir Putin has once again lept to his patron's defense, criticizing the US State Department Report On Global Antisemitism.

Here is what the State Department report actually says about that attack:

On April 22, eight skinheads stormed the Ulyanovsk Jewish Center screaming, "don't pollute our land," smashing windows, and tearing down Jewish symbols as Jewish women and children hid inside. No one was injured, but police failed to respond quickly, arriving 40 minutes after they were called. A member of the extremist National Bolshevik Party later was arrested in connection with the attack. The investigation was ongoing at year's end, but it was suspected that both events were prompted by the anniversary of Hitler's birthday.

The domain name had been initially registered to Michelle Tirado of Southbury, Connecticut, the morning she heard of the tsunami disaster. She listed it for sale with an asking bid of $99, but donated it to Kaplan, who she said claimed to represent an international fund-raising effort.

More on Chabad and the controversy over TsunamiRelief.com can be read here.

Richard H. Schwartz, Ph.D., president of the Jewish Vegetarians of North America, has written an op-ed about Shechita-gate.

1. Noting the problem of tzaar baalei hayyim (cruelty to animals) on factory farms.
2. Criticizing the rabbis who defended throat-ripping as "humane."

1. Just about everything else?

You be the judge.

A Challenge To Chabad

Tzemach Atlas has posted an interesting challenge to Chabad, a challenge that is applicable to most kosher supervising organizations as well.

Is The OU's Rabbi Menachem Genack Telling The Truth?

The OU's Rabbi Menachem Genack has written a letter to the LA Times criticizing its story on Shechita-gate.

Rabbi Genack – who told me he would not have stopped throat-ripping (a.k.a., trachea excision) if he had seen it happening – has consistantly denied any violations of tzaar baalei hayyim (cruelty to animals) law took place at AgriProcessors. In other words, ripping the animal's throat out with a hook seconds after the shechita cut was not a violation of tzaar baalei hayyim law.

Here is the OU's official statement on AgriProcessors.

Here is an anlysis of that statement.

Here is Rabbi Genack's explanation of throat-ripping with a hook.

Read his letter after the jump:

Glatt On Demand? A 2nd Interview With Dr. Temple Grandin

I spoke with Dr. Temple Grandin  today about the yield of glatt-kosher meat, the rate of unconciousness after shechita, and other matters.

According to Dr. Grandin:

The Future Of Kosher

The Washington Post has a story on Albertson's, the grocery behemoth that has been expanding its kosher food presence.

Many experts believe this type of model – as opposed to the mom and pop kosher stores of today – will be the future of kosher retail.

Albertson's – which buys both kosher and non-kosher product from AgriProcessors – has demanded that Rubashkin submit to independent, suprise audits and conform to animal welfare standards.

(You can read Miriam Shaviv's take on the Washington Post article here.)

The Minnapolis-based American Refugee Committee and Nehama, a Minnesota-based Jewish disaster relief organization have come up with a brilliant way to aid tsunami victims:

The Waukon Standard reports on PETA's call for criminal prosecution against AgriProcessors:

In a statement from Mike Thomas, spokesman for Agriprocessors, he explains that Agriprocessors has always strictly followed the federal and Jewish laws, and they treat their animals humanely as a matter of religious principle. "PETA has based its attack on Agriprocessors on a video tape of fewer than one half of one percent of the 18,000 cows that were processed at Agriprocessors during the period they claim to have been at our plant," Thomas explains. He also adds that independent authorities have confirmed that Agriprocessors is humane and follows federal and religious laws. Thomas sited that the USDA is present at the plant every day they operate, and additional visits have been made by the USDA three times since PETA began their campaign. The USDA asked Agriprocessors to make "one minor addition" to their slaughter process, and it was "immediately implemented."

Was Rabbi Yudel Shain fired from B'datz Mehadrin because of his opposition to Rubashkin shechita or did Rabbi Shain quit in protest as he has claimed?

One hint might be that Rabbi Shain's resignation letter appears to have been sent out before the B'datz Mehadrin letter now being circulated was written.

Another hint might be that the B'datz Mehadrin letter was sent to and is apparently being publicized by Rabbi Menachem Meir Weissmandal, who is one of Rubashkin's kosher supervisors.

The B'Datz letter (in Hebrew) can be downloaded here as a PDF file.

A glossary follows after the jump:

Michael Skobac, head of Jews For Judaism in Toronto writes:

According to Maimonides’ Guide to the Perplexed, Rabbi Moshe Cordovero’s Tomer Devorah and numerous other sources, the Torah’s method of ritual slaughter was designed to kill animals as humanely and painlessly as possible. Unfortunately, the conditions under which animals are raised commercially for food production today … routinely violates the prohibition of “tzaar baalei chaim.” It is hardly consistent to abuse animals from birth and then only be concerned about minimizing their pain when we end their lives. Until these objectionable practices are cleaned up, the consumption of mistreated animals should be questioned.

[UPDATE 1/6/05: Rabbi Skobac has just informed me that this article was written four months ago, before the Rubashkin scandal broke. He also writes that he has eaten no meat for 22 years.]

HumaneKosher.com, new rabbinic group made up of predominantly non-Orthodox rabbis, has come out against shechita as practiced at Rubashkin:

No, Of Course It's Not Racism

Ha'aretz has a sad report on Israel's attempt to deport an elderly Christian Ethiopian who helped save Jews from the persecutions of Ethiopia's former communist government. The Jewish Agency recognizes his heroism. His children and grandchildren converted to Judaism and now live in Israel. He is not a security risk. Nevertheless, Israel wants him deported immediately.

Miriam Shaviv notes the similarity between this case and Israel's treatment of the SLA.

Continue reading "No, Of Course It's Not Racism" » 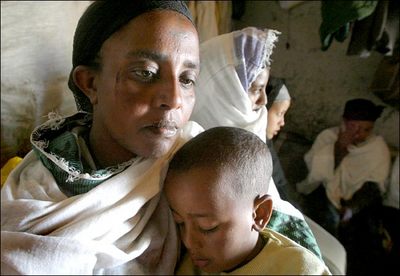 The New York Times has a report on the stalled immigration of the Falash Mura to Israel.

Due to the metal head restrainer design, the Shoichet is afraid that his "chalef" (ritual knife) will hit the metal frame and nick his "chalef" [this would invalidate the shechita] he does not go deep and the v'iridin (veins) aren't severed.

PETA's Ben Goldsmith has written a response to a widely circulated article on Shechita-gate by the OU's Rabbi Menachem Genack: