Bobov 48 Yeshiva Bans Woody Allen's Eyeglasses Because They're "Too Goyish"

A hasidic yeshiva in Borough Park has, in effect, banned Woody Allen's eyeglasses because they are, in the yeshiva's words, "too goyish."

I don't speak Yiddish, but the source who sent this to me claims that Bobov 48 has banned those great retro eyeglasses worn by Buddy Holly in the 1950s, Woodly Allen throughout his long career, and almost any American male – including many hasidic rebbes and haredi rabbis – who wore eyeglasses in the 1950s and early 1960s on the pretext that they are "modern" and "too goyish": 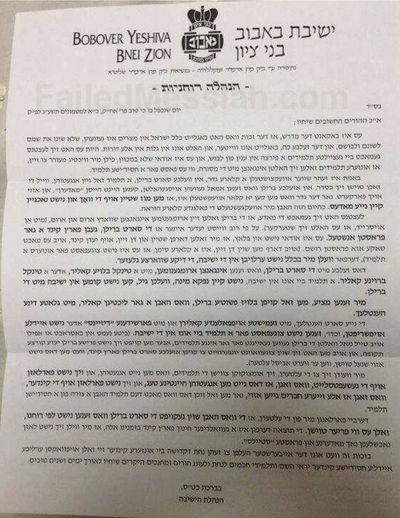 Thou shalt not wear nerdy glasses!

An Orthodox Jewish school in Brooklyn has forbidden thick-framed retro glasses favored by the likes of Woody Allen.

“We are asking that everyone buy simple glasses,” reads a letter written in Yiddish that was recently issued to parents of students at Borough Park’s Bobover Yeshiva B’Nei Zion, which caters to members of the Bobov sect.

“What we have to commit ourselves to is we have to stand on top of this and not tolerate the new modernism.”

Students at the 48th Street school, which serves Grades 4 through 12, plus older rabbinical students, had been taking a shine to thick-framed and multicolored glasses.

“The good deed that accompanied the Jews in Egypt was that they didn’t change their names and clothes, and this same strength is still accompanying us and maintaining us in exile — in all generations,” explains the letter, which calls for traditional garb and was posted by the blog Failed Messiah.

School officials admit there’s no easy way to head off trends in specs, since styles fluctuate so much.

Still, the thick frames — often seen on celebs such as LeBron James and Justin Timberlake — “give the child a very coarse look,” the letter says.

“It doesn’t matter what age — a student cannot come to yeshiva with these glasses,” the letter reads.

Parents are asked to exchange the “immodest” frames and told that the expense should be viewed as an “educational boost.”

School officials recently descended on another local eyewear shop, MS Optical, to inspect its wares, an employee told The Post.

“They basically said these are the Hasidic ones — and those are not,” the employee said.

The store keeps its “acceptable” glasses — frameless, semi-rimless — in a separate display, far away from bolder styles.

“What one kid does, another will copy. The school doesn’t want a domino effect,” said Nafle Frank. “Style is not a sin, but the culture is to stay away from new things and to keep them the way they were.”

He joked that the two Satmar grand rabbis — Aaron and Zalman Teitelbaum — have been wearing hipster glasses for the past 35 years.